There are 2 aspects to look at in scalability

(i) Performance (or latency) Depending on the context, this may involve achieving one or more of the following:

(ii) Availability (and Fault Tolerance) Distributed systems can take a bunch of unreliable components, and build a reliable system on top of them.

Systems that have no redundancy can only be as available as their underlying components. Systems built with redundancy can be tolerant of partial failures and thus be more available.

Availability is in some sense a much wider concept than uptime, since the availability of a service can also be affected by, say, a network outage or the company owning the service going out of business (which would be a factor which is not really relevant to fault tolerance but would still influence the availability of the system). But without knowing every single specific aspect of the system, the best we can do is design for fault tolerance.

Working within those constraints:

Beyond these tendencies - which are a result of the physical constraints - is the world of system design options.

There are two basic techniques in which a data set is distributed between multiple nodes: partition and replication. 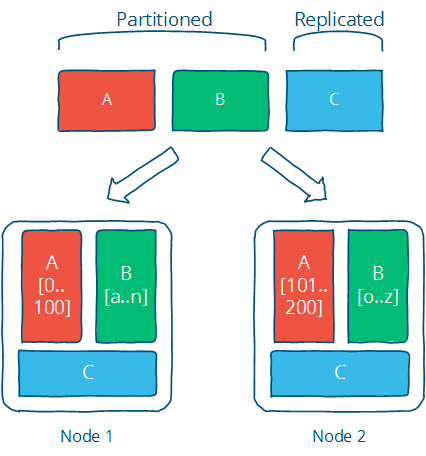 In a distributed system :

System models vary in their assumptions about the environment and facilities. These assumptions include:

A robust system model is one that makes the weakest assumptions: any algorithm written for such a system is very tolerant of different environments, since it makes very few and very weak assumptions.

On the other hand, we can create a system model that is easy to reason about by making strong assumptions. For example, assuming that nodes do not fail means that our algorithm does not need to handle node failures. However, such a system model is unrealistic and hence hard to apply into practice.

There are 3 main factors/properties affecting the Distributed computing

Nodes serve as hosts for computation and storage. They have:

The theorem states that in any distributed system, only 2 of these 3 properties can be satisfied simultaneously:

We get 3 different system types:

For example if you consider a distributed DB, there are essentially three variables r, w, n where

In a cluster with 5 nodes,

Consistency Model is a contract between programmer and system, wherein the system guarantees that if the programmer follows some specific rules, the results of operations on the data store will be predictable

There are 2 types of consistency models:

(capable of maintaining a single copy)