ACID mean that once a transaction is complete, its data is consistent (tech lingo: write consistency) and stable on disk, which may involve multiple distinct memory locations.

Write consistency can be a wonderful thing for application developers, but it also requires sophisticated locking which is typically a heavyweight pattern for most use cases.

A BASE datastore values availability (since that’s important for scale), but it doesn’t offer guaranteed consistency of replicated data at write time. Overall, the BASE consistency model provides a less strict assurance than ACID: data will be consistent in the future, either at read time (e.g., Riak) or it will always be consistent, but only for certain processed past snapshots (e.g., Datomic).

If someone is reading from a DB at the same time as someone else is writing to it, it is possible that the reader will see a half-written or inconsistent piece of data. There are several ways of solving this problem, known as concurrency control methods. The simplest way is to make all readers wait until the writer is done, which is known as a lock.

A lost update occurs when the following events occur, in the order presented here:

Block operations in some situations, if they may cause violation of some rules, and do not block in other situations while delaying rules checking (if needed) to transaction’s end, as done with optimistic.

(e.g., Two-phase locking - 2PL) - Controlling access to data by locks assigned to the data. Access of a transaction to a data item (DB object) locked by another transaction may be blocked (depending on lock type and access operation type) until lock release.

(also called Serializability, or Conflict, or Precedence graph checking) - Checking for cycles in the schedule’s graph and breaking them by aborts.

(Deferred update) - Each transaction maintains a private workspace for its accessed data, and its changed data become visible outside the transaction only upon its commit (e.g., Weikum and Vossen 2001). This model provides a different concurrency control behavior with benefits in many cases.

A flat transaction is the simplest form of a transaction. It comprises a collection of operations that are bounded by a begin statement and an end statement. Either all of the operations in the bounded collection are executed (committed) or none are (aborted). A transaction may be aborted either by the program executing it or because of an external failure, such as a system crash.

Chained transactions are a variant of savepoints. However, rather than simply marking a point of consistency to which the transaction can return, the chain work command actually commits the work so far. Therefore, there is no opportunity to roll back any of the previous work. However, the transaction itself survives. Any locks held by the transaction continue to be held as further work is done. Only when the full transaction is committed are its locks released. 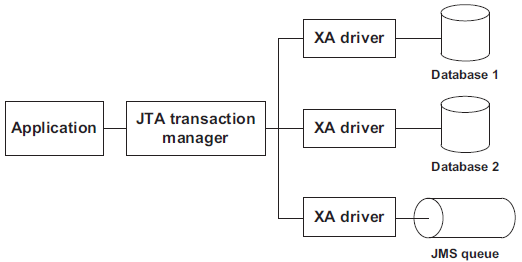 However, the look up string name could be different for app servers. To run the code outside of a container like for unit test cases, TransactionManager interface is used as below.

In declarative txn, we must tell the container when to begin a txn, which methods should participate in a txn, etc. There are 6 transaction attributes

That is a simple task that issue two reads from table T, with a delay of 1 minute between them.

The ANSI/ISO SQL standard (SQL92) defines 4 levels of transaction isolation with differing degrees of impact on transaction processing throughput. These isolation levels are defined in terms of 3 phenomena that must be prevented between concurrently executing transactions.

The three preventable phenomena are:

Distributed txn is a txn that spans over 1 or more resources. It could be between 2 different dbs, or 2 different messaging channels, or db and a messaging queue/topic. 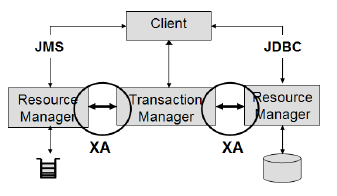 During the 2-phase commit process a Resource Manager may use heuristic decision making and either commit or rollback its work independent of the Txn Mgr. Heuristic decision making is a process that involves making intelligent choices based on various internal and external factors. When a Resource Manager does this it is reported back to the client through Heuristic Exception.

They only occur under XA during the 2-phase commit process, specifically after a participant has responded in phase 1. The most common reason for this is a timeout condition between phase 1 and 2. When communication is lost or delayed, the resource managers might make a decision to commit or rollback its work in order to free up resources.

The 3 JTA Heuristic exceptions in JTA are

Two golden rules apply to all of the transaction strategies :

Check above for explanation

Global transactions are tricky. They are

Depending on the context and resources involved, other techniques are viable alternatives to XA; they involve coding and usually perform better than XA. 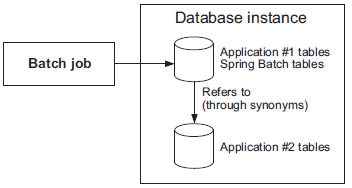