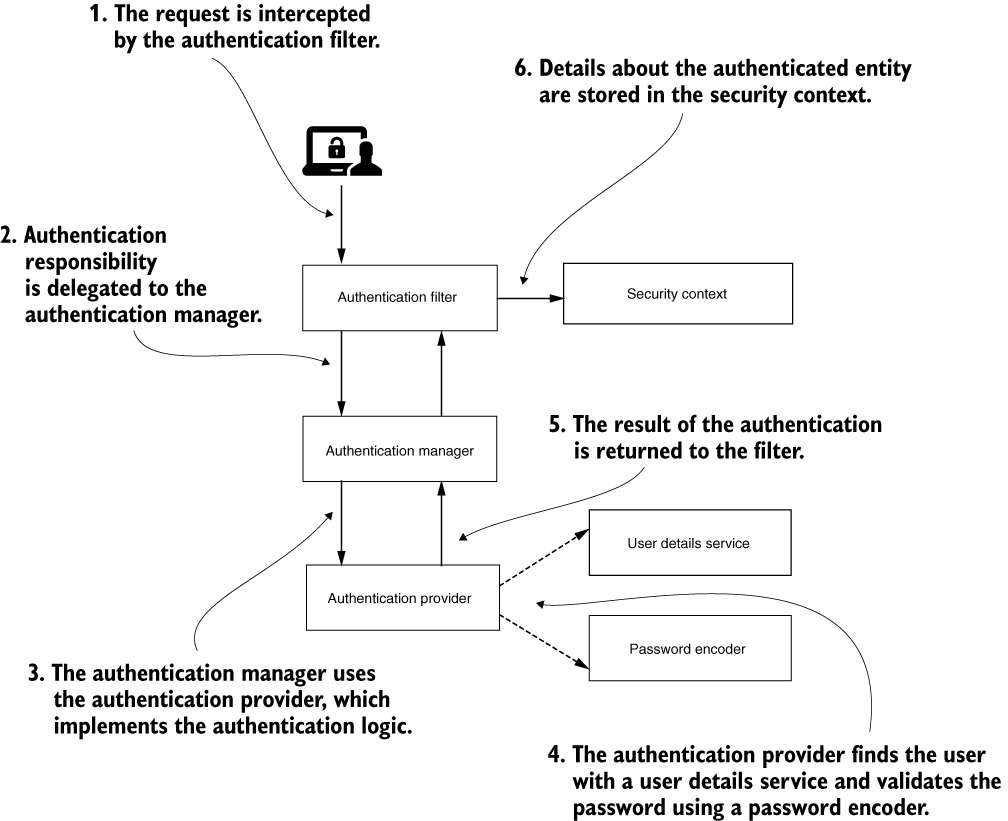 With cURL, you can set the HTTP basic username and password with the -u flag. Behind the scenes, cURL encodes the string <username>:<password> in Base64 and sends it as the value of the Authorization header prefixed with the string Basic. And with cURL, it’s probably easier for you to use the -u flag. But it’s also essential to know what the real request looks like. So, let’s give it a try and manually create the Authorization header. 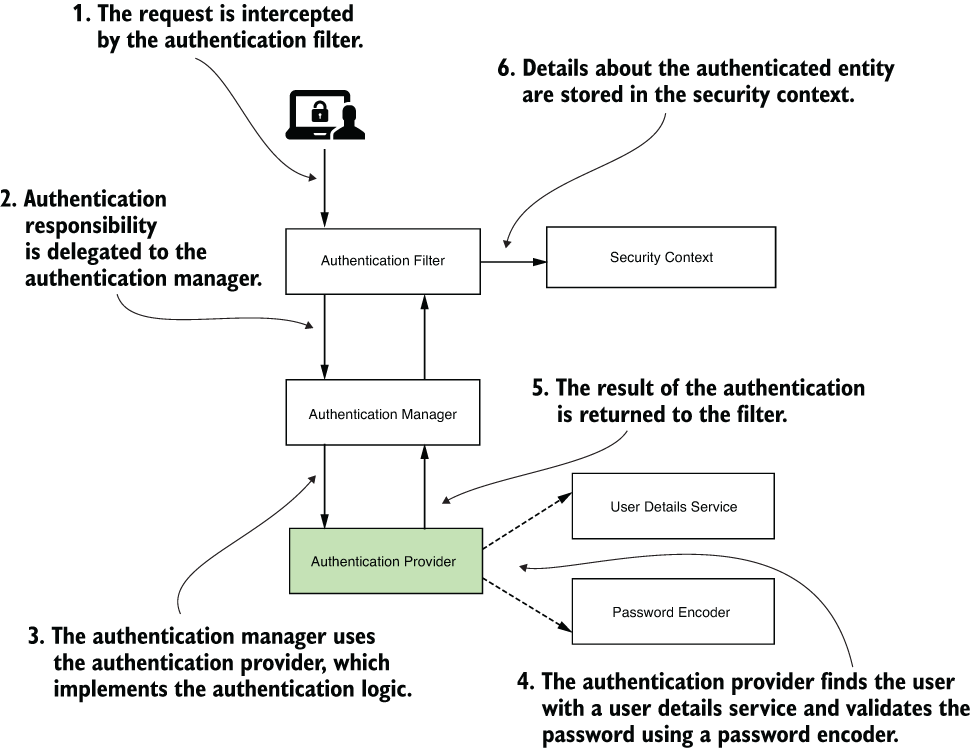 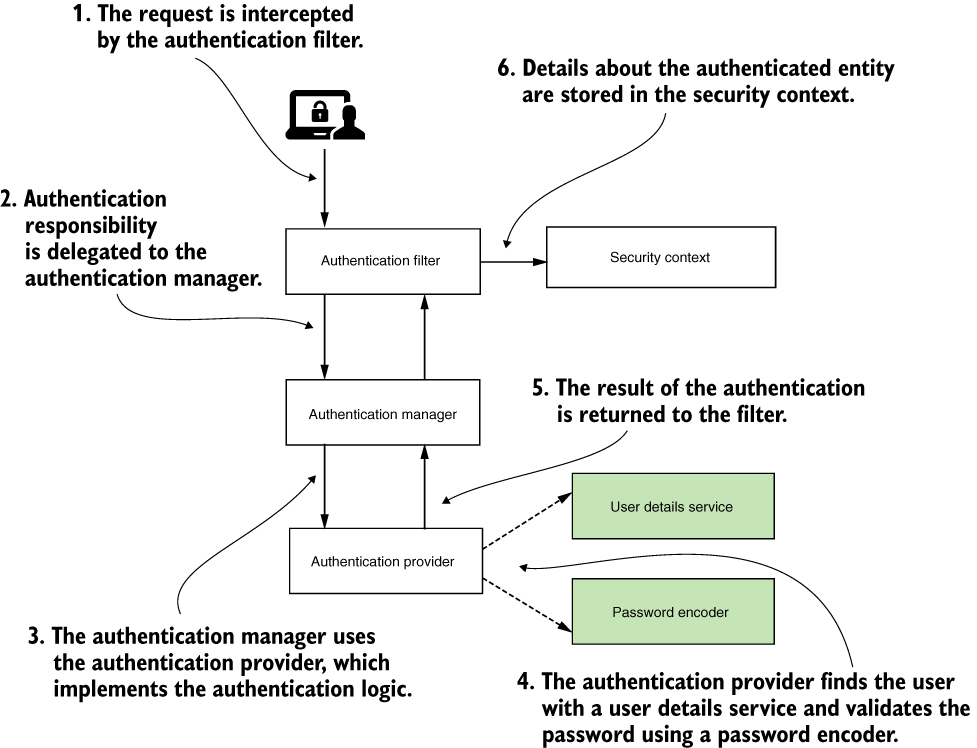 Detailing on the GrantedAuthority contract

Using a builder to create instances of the UserDetails type

The User class from the org.springframework.security.core.userdetails package is a simple way to build instances of the UserDetails type. Using this class, you can create immutable instances of UserDetails.

The authentication implementation calls the loadUserByUsername(String username) method to obtain the details of a user with a given username . The username is, of course, considered unique. The user returned by this method is an implementation of the UserDetails contract. If the username doesn’t exist, the method throws a UsernameNotFoundException.

The AuthenticationProvider is the component that implements the authentication logic and uses the UserDetailsService to load details about the user. To find the user by username, it calls the loadUserByUsername(String username) method. 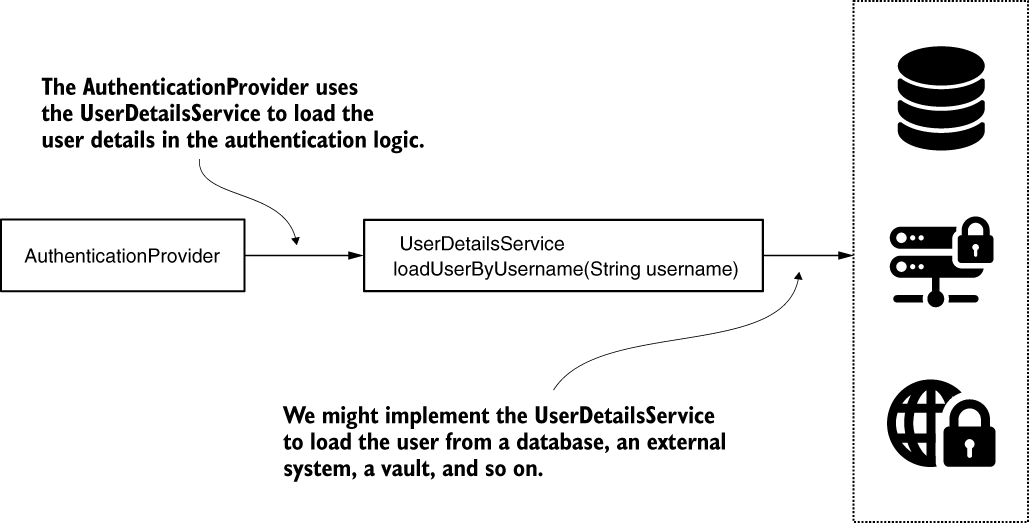 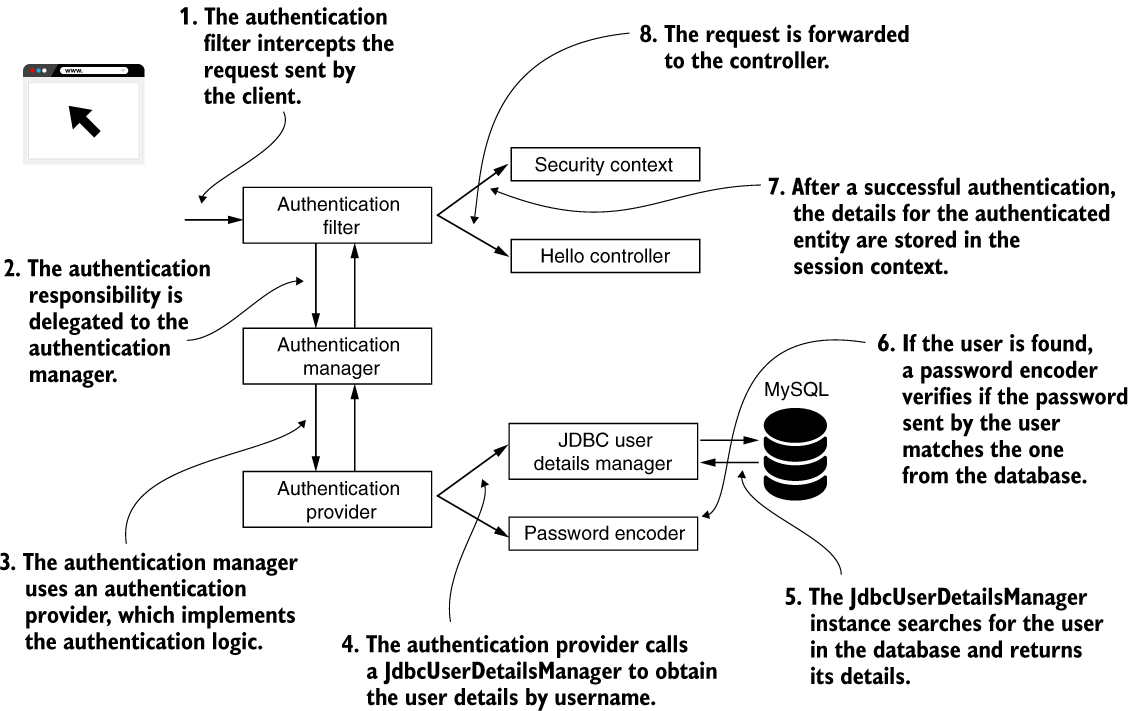 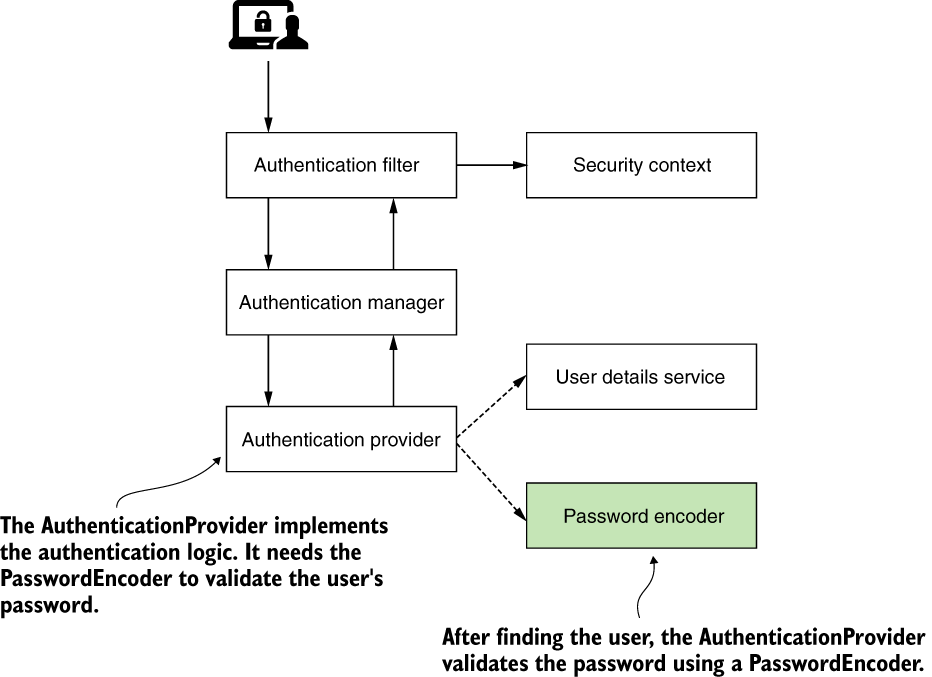 The authentication process, which has only two possible results: 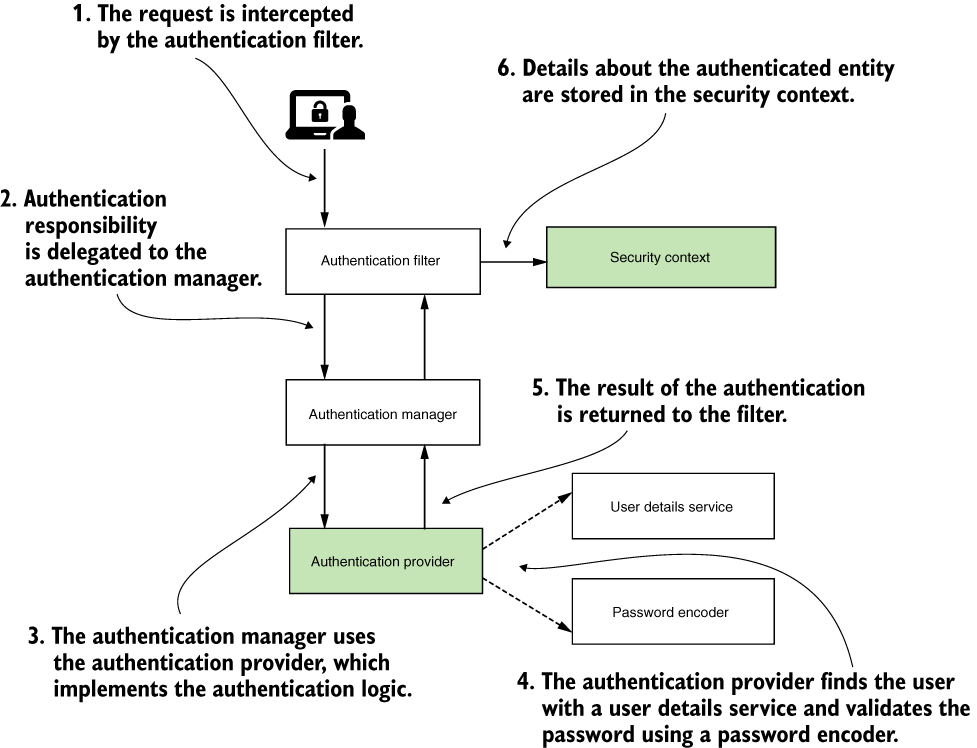 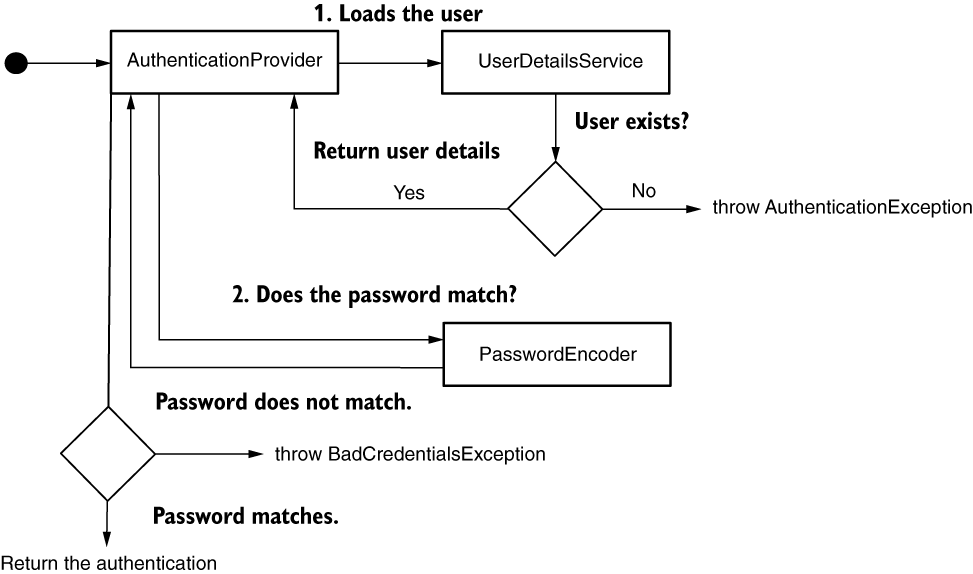 To plug in the new implementation of the AuthenticationProvider, override the configure(AuthenticationManagerBuilder auth) method of the WebSecurityConfigurerAdapter class in the configuration class of the project.

Using a holding strategy for the security context

The first strategy for managing the security context is the MODE_THREADLOCAL strategy. This strategy is also the default for managing the security context used by Spring Security. With this strategy, Spring Security uses ThreadLocal to manage the context. This implementation works as a collection of data but makes sure that each thread of the application can see only the data stored in the collection. This way, each request has access to its security context. No thread will have access to another’s ThreadLocal. And that means that in a web application, each request can see only its own security context. We could say that this is also what you generally want to have for a backend web application.

This architecture only applies to the traditional servlet application where each request has its own thread assigned. It does not apply to reactive applications. 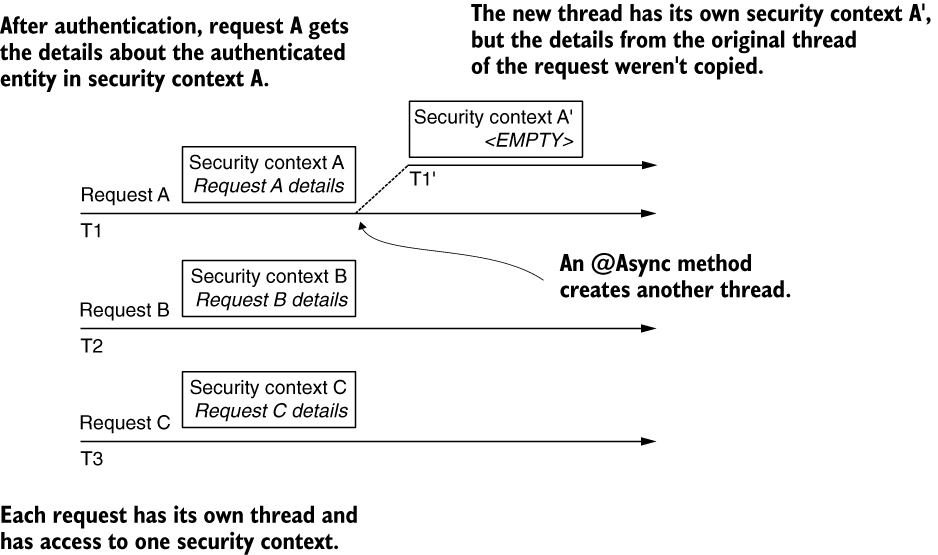 Each request has its own thread, represented by an arrow. Each thread has access only to its own security context details. When a new thread is created (for example, by an @Async method), the details from the parent thread aren’t copied.

Being the default strategy for managing the security context, this process does not need to be explicitly configured. Just ask for the security context from the holder using the static getContext() method wherever you need it after the end of the authentication process.

Obtaining the authentication from the context is even more comfortable at the endpoint level, as Spring knows to inject it directly into the method parameters. You don’t need to refer every time to the SecurityContextHolder class explicitly. 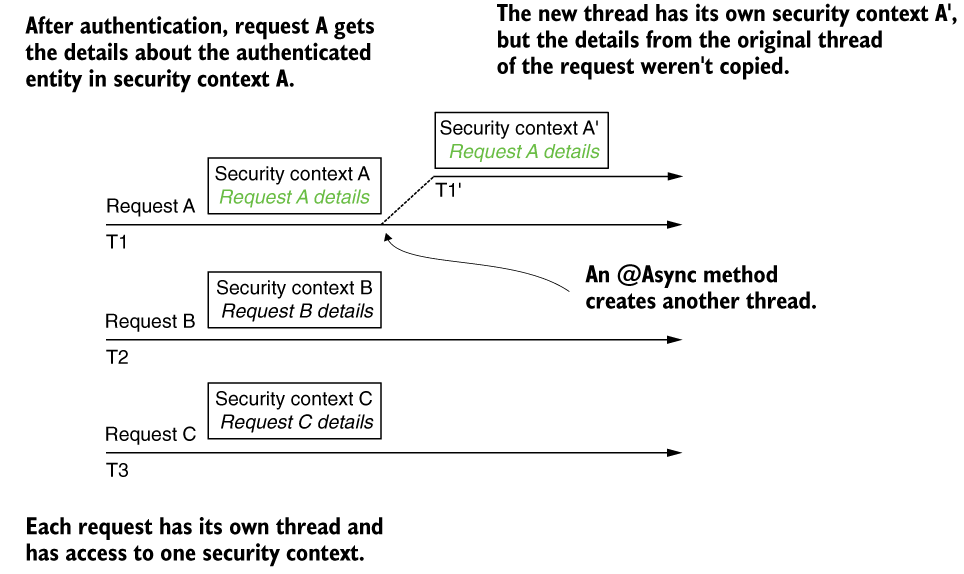 The situation gets more complicated if we have to deal with multiple threads per request. Look at what happens if you make the endpoint asynchronous. The thread that executes the method is no longer the same thread that serves the request.

If you try the code as it is now, it throws a NullPointerException on the line that gets the name from the authentication, which is String username = context.getAuthentication().getName().

This is because the method executes now on another thread that does not inherit the security context. For this reason, the Authorization object is null and, in the context of the presented code, causes a NullPointerException. In this case, you could solve the problem by using the MODE_INHERITABLETHREADLOCAL strategy. This can be set either by calling the SecurityContextHolder.setStrategyName() method or by using the system property spring.security.strategy. By setting this strategy, the framework knows to copy the details of the original thread of the request to the newly created thread of the asynchronous method.

If what you need is a security context shared by all the threads of the application, you change the strategy to MODE_GLOBAL.

With MODE_GLOBAL used as the security context management strategy, all the threads access the same security context. This implies that these all have access to the same data and can change that information. Because of this, race conditions can occur, and you have to take care of synchronization. 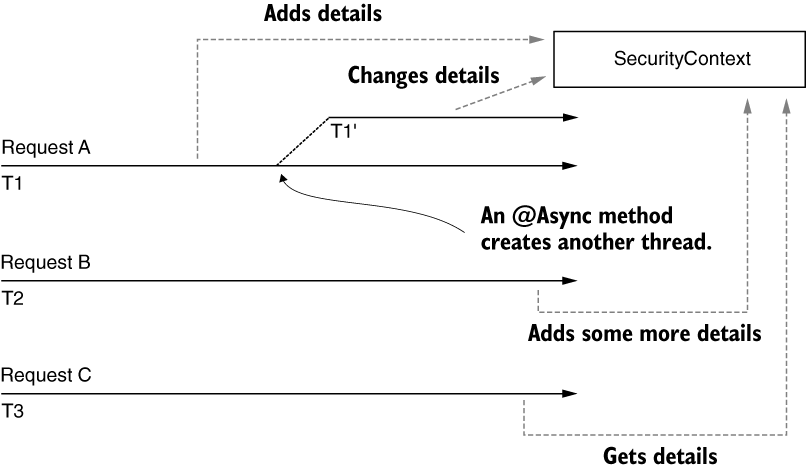 Forwarding the security context with DelegatingSecurityContextRunnable

What happens when your code starts new threads without the framework knowing about them? Sometimes we name these self-managed threads because it is we who manage them, not the framework. 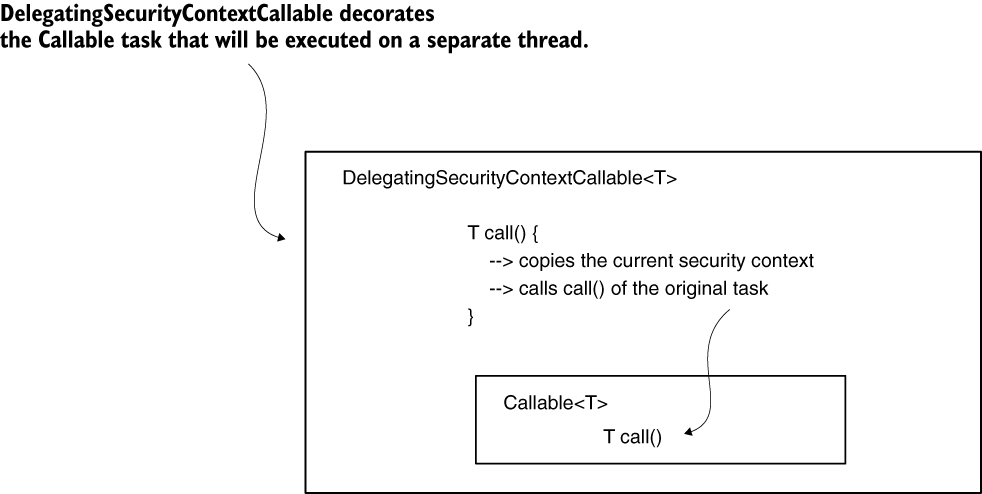 If you run the application as is, you get nothing more than a NullPointerException. Inside the newly created thread to run the callable task, the authentication does not exist anymore, and the security context is empty. To solve this problem, we decorate the task with DelegatingSecurityContextCallable, which provides the current context to the new thread, as provided by this listing.

Forwarding the security context with DelegatingSecurityContextExecutorService 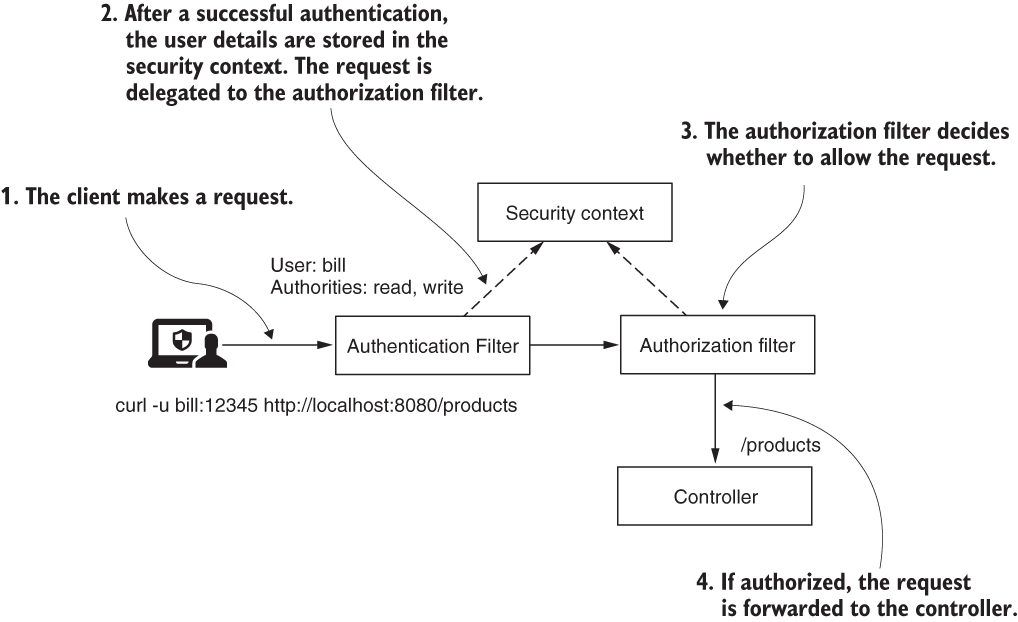 You provide the name of the authority allowed to the user as a parameter of the hasAuthority() method. The application needs, first, to authenticate the request and then, based on the user’s authorities, the app decides whether to allow the call.

hasAuthority('WRITE') – Stipulates that the user needs the WRITE authority to call the endpoint.

hasAnyAuthority('READ', 'WRITE')–Specifies that the user needs one of either the READ or WRITE authorities. With this expression, you can enumerate all the authorities for which you want to allow access.

To specify access based on user authorities, the third way you find in practice is the access() method. The access() method is more general, however. It receives as a parameter a Spring expression (SpEL) that specifies the authorization condition. This method is powerful, and it doesn’t refer only to authorities. However, this method also makes the code more difficult to read and understand. For this reason, I recommend it as the last option, and only if you can’t apply one of the hasAuthority() or hasAnyAuthority() methods presented earlier.

Restricting access for all endpoints based on user roles

To set constraints for user roles, you can use one of the following methods:

When building users with the User builder class as we did in the example for this section, you specify the role by using the roles() method. This method creates the GrantedAuthority object and automatically adds the ROLE_ prefix to the names you provide.

Important to remember that the access() method is generic. For example, to configure access to the endpoint to be allowed only after 12:00 pm, you can use the following SpEL expression:

If you now add any other endpoint to your application, it is accessible by default to anyone, even unauthenticated users.

The permitAll() method states that all other requests are allowed without authentication.

When you use matchers to refer to requests, the order of the rules should be from particular to general. This is why the anyRequest() method cannot be called before a more specific matcher method like mvcMatchers().

If you have designed an endpoint to be accessible to anyone, you can call it without providing a username and a password for authentication. In this case, Spring Security won’t do the authentication. If you, however, provide a username and a password, Spring Security evaluates them in the authentication process. If they are wrong (not known by the system), authentication fails, and the response status will be 401 Unauthorized. To be more precise, if you call the /hola endpoint for the configuration presented in listing 8.4, the app returns the body “Hola!” as expected, and the response status is 200 OK.

The permitAll() method refers to authorization configuration only, and if authentication fails, the call will not be allowed further.

To make all the other endpoints accessible only for authenticated users. To do this, you would change the permitAll() method with authenticated() as presented in the following listing. Similarly, you could even deny all other requests by using the denyAll() method.

Multiple endpoints can have the same authorization rules, so you don’t have to set them up endpoint by endpoint

This matcher uses the standard MVC syntax for referring to paths. This syntax is the same one you use when writing endpoint mappings with annotations like @RequestMapping, @GetMapping, @PostMapping, and so forth. The two methods you can use to declare MVC matchers are as follows:

For the current project, we want to ensure that the same rules apply for all requests for paths starting with /a/b. These paths in our case are /a/b and /a/b/c. To achieve this, we use the ** operator. (Spring MVC borrows the path-matching syntaxes from Ant.)

The ** operator refers to any number of pathnames. You can use it as we have done in the last example so that you can match requests with paths having a known prefix. You can also use it in the middle of a path to refer to any number of pathnames or to refer to paths ending in a specific pattern like /a/**/c. Therefore, /a/**/c would not only match /a/b/c but also /a/b/d/c and a/b/c/d/e/c and so on. If you only want to match one pathname, then you can use a single *. For example, a/*/c would match a/b/c and a/d/c but not a/b/d/c.

You can customize the filter chain by adding new filters before, after, or at the position of existing ones. This way, you can customize authentication as well as the entire process applied to request and response.

Adding a filter before an existing one in chain

Adding a filter after an existing one in chain

Adding a filter at the location of another in the chain

1. Identification based on a static header value for authentication

2. Using a symmetric key to sign the request for authentication

3. Using a one-time password (OTP) in the authentication process 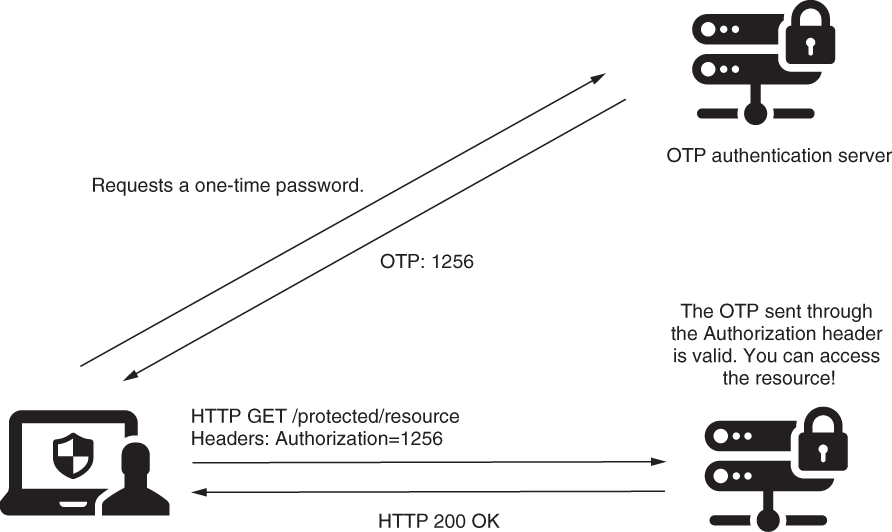 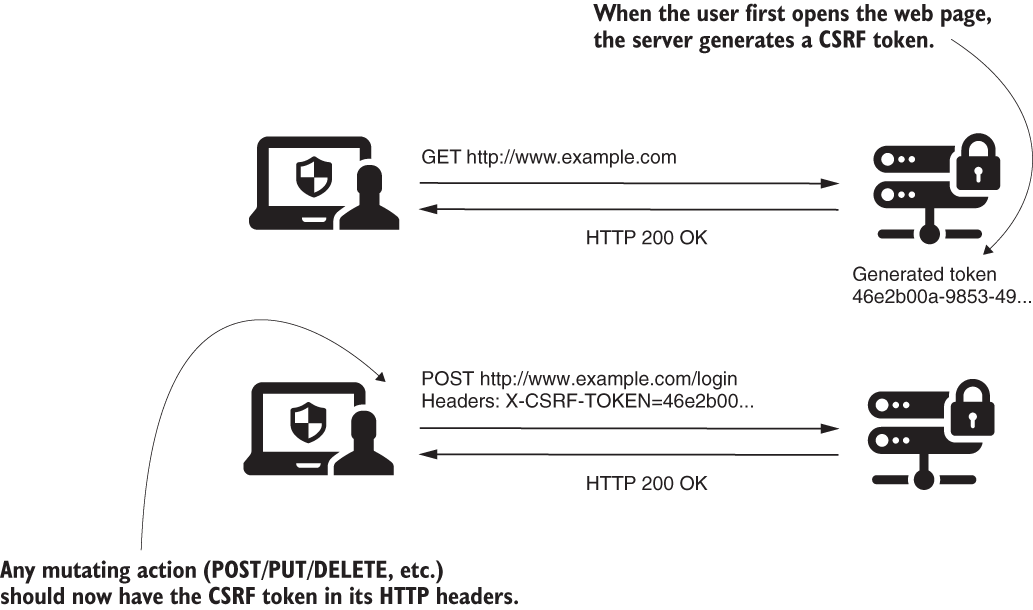 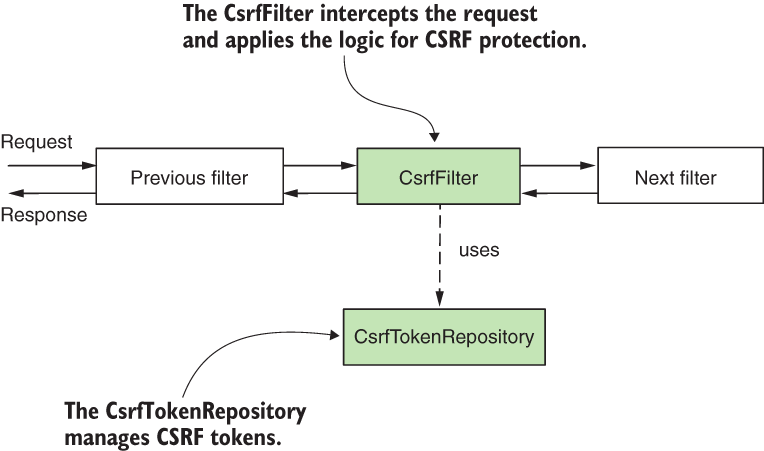 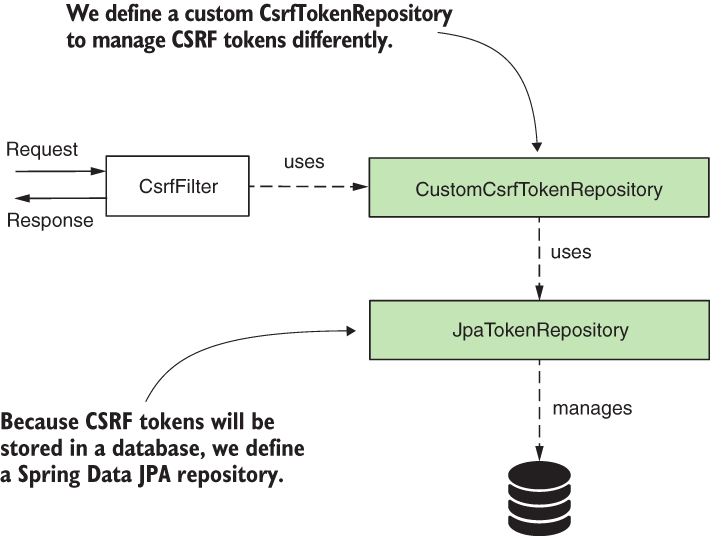